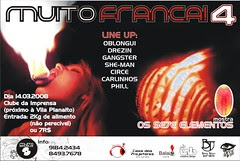 Bit pedestrian compared to all the "Gangster"s and "She-men", eh?

Basically, I never gave the organizers of the first party I played at any sort of nome-de-disc and so they printed up the flier with this mis-spelling of my real name. Now I guess it's going to follow me around, and if I change it no-one will know it's the same person, will they :-)

Frankly I can't think of anything better at the moment, anyway.

Which is a shame, because I do rather like the way that all the Niche producers have robotic voices saying things like "T2 Productions" or guys with northern accents saying "Mikey B On Productions" all the way through the track. In an age of sampling and audio downloading the only way to guarantee your attention is to watermark / brand ruthlessly everywhere. It's cool to have a logo. It makes you feel somehow important.

So I spent 10 minutes playing with the the new Fruity Loops voice synthesizer saying "Synaesmedia Productions". The Synaesmedia brand flails around, never really attaching itself to anything properly, but it can have some fun there for a while. However, the track went all "Super Radio FM". Not at all niche or bassline house. Just sort of old-skool, easy listening house with the bright but miasmic glowing melody line smothering everything else.

Well, it's 2AM in the morning ... so I guess late-nite is what I'm feeling. Even though I have no idea what I'm actually going to play tomorrow and I should be preparing my playlist etc. Expect it to sound nothing like this, though :

Phill, hope Clube da Imprensa was a blast and everyone was dancing.

Andrew Ross has and interesting piece The Global U Phenomenon. This comment probably belongs on one of the netocracy threads, but I'll just point to it without comment.

Actually, a bit of a shambles. Somehow the organizers failed to provide a sound-system in the chill-out area where I was playing. So at about 1AM one of the guys running that had to go home and pick up his practice equipment. Not really able to handle bass-heavy dubstep.

Also, although people were sitting around on cushions, I was really in a mood to play the bassline / niche stuff I've been getting into recently. So I did, but it was a bit too fast for the environment, and no-one danced.