Sobreiro needs your vote. Another classic that will leave you wondering forever if you don't help it win.
Postado por Composing às 3:45 PM No comments:

Sounds good. Someone been reading Composing? :-)

Email ThisBlogThis!Share to TwitterShare to FacebookShare to Pinterest
Marcadores: books

Now this is a disturbing scenario.
Postado por Composing às 9:52 PM No comments: 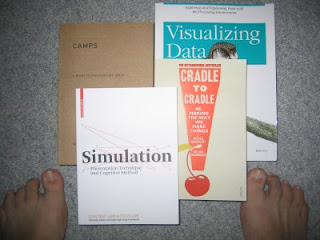 Other recent book purchases ... not sure if there's a hidden connection, but all suggestions welcome.

Read this through to the end, even if you think you know all this, because he starts explaining the more complicated stuff later on, and you need the run-up.
Postado por Composing às 10:36 PM No comments:

I can't stop listening to Seed Ships from the end of the new Belbury Poly album, (From an Ancient Star).

Outrageously lovely and packed with echoes and references : the "oceanic waves" at the end blatantly mimicking the fade-out of Jean-Michel Jarre's haunting Oxygene 6; the key-changing, reverbed arpeggios recalling The Black Dog's permagasmic Chesh; the melody patch which sounds like it's stolen from Plone.

And then when the big tune gets going, it keeps reminding me (although, I know it's neither the same melody or rhythm), of Momus's Flame into Being. Or maybe that's just me.

Infinitely familiar and strange at the same time, and utterly gripping.

Apart from that, I have mixed feelings about the album. There's no doubt that he has refined and sophisticated the Belbury sound. The compositions are more complex and developed. But what I miss, are the outliers; the tracks that don't conform to the standard library-synth pattern but which made "The Owl's Map" more varied and therefore more unexpected. The rocky Scarlet Ceremony and atmospheric Music, Movement & Meaning.

And it's lost some of the overtly folky bits too. Ratlers Hay and Wetland were subtle and sympathetic hybrids. On the new album, only From an Ancient Star seems interested in the same trick, and here the folk seems bolted on, more like one of Momus's clumsier "folktronicas". I guess there's something Steeleye Spanish about Widdershins too. But frankly I don't feel I'm in anywhere like as spookily pagan a place this time. It's all rather comfortable and cosy.
Postado por Composing às 12:14 AM No comments:

The Guardian discusses "scrappage" for the UK.

Seems to me that this could (and should) be done, but with a far more aggressive green agenda.

Why not have the government give :
- £3000 to anyone scrapping their car and buying an electric one.
- £2000 for a small hybrid (accepts bio-diesel or alcohol)
- £1000 for a small, fuel efficient car
- £500 for anyone upgrading to any new car (on the assumption that new cars are more efficient)
Postado por Composing às 7:28 PM No comments:

1 in 10 US citizens on government food-stamps.
Postado por Composing às 9:23 PM No comments: