I wonder if that's the answer to my problem for where to go with desktop applications like SdiDesk.
Postado por Composing às 8:56 PM No comments:

Email ThisBlogThis!Share to TwitterShare to FacebookShare to Pinterest
Marcadores: air, flash, flex, programming, python, sdidesk
Quite surprised by wikipedia today. Recently I created a page about Global Guerrilla theorist, John Robb, which people keep trying to delete because it's claimed I haven't succeeded in demonstrating that he's "significant".

Now, I thought the whole point of Wikipedia as an "organic" encyclopedia is that it lets articles "grow" through the accretion of multiple edits. When I created the page I didn't have time to create a full explanation of the subject, but I hoped that others would "swarm on the target" and add their own contributions to build it up into a worth-while resource.

It seems that something like this "significance" criteria works against that possibility. If, when you create an article you're going to have to demonstrate to any random reviewer who wanders past that the subject is "significant" you can't really plant a seed for others to cultivate. You have to come with a fully formed article. Doesn't that defeat the whole point of the thing?

I guess they're trying to stop wikipedia being full of useless vanity pages like a kind of less multi-media MySpace. But this itself is interesting. In a democratic, bottom-up, self-organized phenomenon what exactly is the purpose of "significant"? Is wikipedia running out of shelf-space? Will Google fail to be able to find the good pages among all the crap? Does the wikipedia community feel it needs to become a "gate-keeper" after all? Perhaps it has to follow Shirky's Iron-Law of becoming more conservative to protect the interests of the early-arriving, more-invested, inner-elite.
Postado por Composing às 7:57 PM No comments:

Aaron Swartz has a cool thing : Science that Matters
Postado por Composing às 10:53 AM No comments:

The bloody impressive sounding Fauxharmonic Orchestra gets to grips with a Wii controller.

Check out some of their (his) other performances too.
Postado por Composing às 10:29 PM No comments: 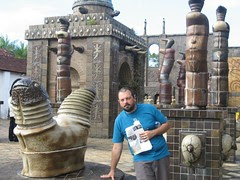 I have a new theory about George Bush. Having fucked up the world badly in his own presidency, he's now trying to stir up as much trouble as possible to leave to his successor, maybe in the hope that he'll look less bad in comparison.

So, Bush may want to stop Iran acquiring nuclear weapons, but thinks it's worth tweaking the tail of the Russians by stationing missiles next door and turning down their offer of collaboration on a genuine anti-Iranian military project. Predictable result : more Russian / Iranian co-operation, higher-probability of Russian nuclear expertise getting to Iran, lower probability of Russian diplomatic support for sanctions against Iran. Meanwhile, he's trying to hurry along the breakup of Serbia (unpopular with both Serbs and Russians) that may re-ignite war in Kosovo.

There's also recent talk that the US military in Iraq will retreat into Kurdistan with obvious issues for US / Turkish relations, starting, er, now.
Postado por Composing às 6:04 PM No comments: