Email ThisBlogThis!Share to TwitterShare to FacebookShare to Pinterest
Marcadores: wiki, wikipedia, winer
I believe that Wiki Creole is going to be a grand failure. Which is a shame, because from what I know of them, I like a lot of the people involved and I want to see people enthused by wiki-projects.

But they've set themselves a hard problem. Glancing at the current discussions it looks like they've already tied themselves in knots : eg. using * for bold and list items - and then having to go back and change their minds, and then changing them again.

I don't like the Creole syntax at all. Probably for stupid, selfish and ideosyncratic reasons.

But these are the kind of reasons that count.
Postado por Composing às 8:09 PM No comments:

That's Microsoft's XWand project from 2002. Even though it's probably not state of the art, it's shiny. Want one. Want one. :-)

And did I mention this multitouch video?
Postado por Composing às 2:21 AM No comments:

Email ThisBlogThis!Share to TwitterShare to FacebookShare to Pinterest
Marcadores: magic wand, microsoft, multitouch, ubicomp
Kind of like I was assuming, people are definitely thinking about a magic wand metaphor for physical user interfaces.

This is something I'm finding a lot more plausible than user-interfaces based on sophisticated 3D graphics derived from game technology. And I'm going to be reading OrangeCone regularly from now on.

I wonder how hard would it be for DragonMother or Alferian Gwydion MacLir to put a simple LED in a wand?
Postado por Composing às 12:58 AM No comments: 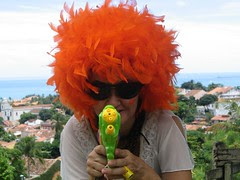 I put some more photos of Recife Carnival up on Flickr.

The future of software development is component stream management 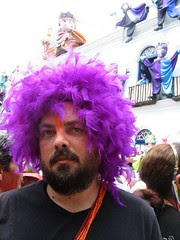 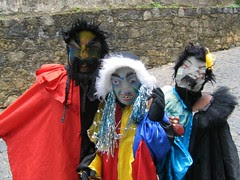 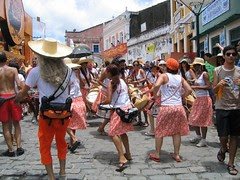 Olinda, the old Portuguese capital of Brazil is now a picturesque borrough of Recife. And another centre of carnival. 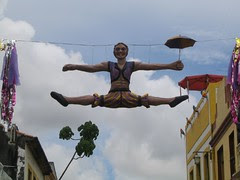 Frevo is one of the big musical styles of Recife - a kind of weird high-energy, big-band jazz.

In the streets it's a rag-tag mixture of batteries of African drums and a few delinquent trombones and trumpets playing the same few riffs over and over.

On record, its stylings and texture could be anyone from Louis Armstrong to "trad" fakesters like Chris Barber. But listen more closely and you notice how frenetic the whole thing is. The riffs and stabs continuously remind you of the last 50 years of "latin" dance and "jazz" and yet there's something strange about it. The rhythm section rattles along at around 170 bpm. The melodies are unexpected - infected by same Brazilian melancholy that touches Chorinho and early samba - then lurching into something like German cabaret with the singers theatrically whooping and putting on funny voices. But there's no "blues" as you would expect from North American music.

Frevo de Bloco is more leisurely with a stronger melodic connection to olders styles. A chorus of women sing sentamentaly about Recife and that life without Frevo is mere pain and suffering. 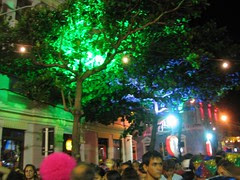 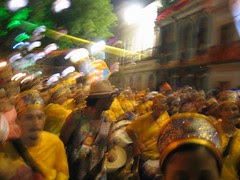 
Of course, Rio has its popular street carnival as well, but I've seen nothing like Recife - which claims to have something like a million people in the streets. Carnival begins informally on Thursday night, opens formally on Friday, and was still going strong when we left late afternoon Tuesday.
Postado por Composing às 2:01 AM No comments:

OK, back from Recife, photos soon,

Meanwhile, back to work tomorrow. :-(

And, as part of the very slow, incremental upgrade of my online life, there's a new OPTIMAES blog, the aim of which is to replace the OPTIMAES wiki as the main place to talk about OPTIMAES. (Despite the overall wonderfulness of wiki, blogs seem to be better at holding a conversation.) I'll also do more of my general writing about alt.money there. Previously I did it on Tribe, but that now seems to be hidden from non-members.
Postado por Composing às 7:27 PM 4 comments: 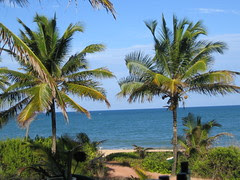 Update on the pen computing obsession.

I found and downloaded the trial version of Ideogramic Ideas.

Verdict after a quick play : it does what it says on the tin. It's exactly how I want to draw diagrams. What it's missing is the next stage : ways to infer other kinds of information from the diagrams. So, the simple diagrams remain a novelty and not much else.

I wonder what's up with this company. No news on the web-site since late 2002.
Postado por Composing às 2:43 AM No comments:

Email ThisBlogThis!Share to TwitterShare to FacebookShare to Pinterest
Marcadores: UI
Cool. Finally Blogger seems to have got a decent search facility.

Consider some interesting searches on this blog :

I'm not a gadget freak. I'm too poor, and too anti-consumerist to obsessively spend my time reading Gizmodo et. al. and lusting over the latest gear.

However, this weekend I bought myself a present.

As you can see from the reviews, this pen-instead-of-a-mouse is at the decidedly cheap and cheerful end of the market. Nevertheless, I'm enjoying using it. I've played with the paint program and it's fun. And I'm adapting myself to using it instead of a mouse for all activities.

Well, last year I did get very impressed by this interactive whiteboard demo. And here's something even more spectacular. Obviously a pen-mouse isn't in the same league as cool interactive whiteboards and giant touch-screens, but the important common element is the use of fluid gestures in your interface.

And that is something you can't really explore with a mouse but you can begin to with a pen. Flying around Google Earth with the pen feels different from the mouse. Whereas the mouse involves basically waggling the wrist, the pen brings in the forearm and elbow too.

A mouse is normally only about going to a place and selecting it. Typically, objects which are static and visible on the screen. A pen can be about how you go to a place. The dynamic movement of the body. A gesture is something which can be always available at your finger-tips without cluttering up screen-space with a visible representation. (OK, that makes it harder for the naive user, but can make the UI more clean and elegant.)

I loved teaching with a whiteboard (and never used PowerPoint). Whiteboards work even more of your body. I guess the Wii controllers are going to make the body the issue in video gaming too. The hype almost guarantees that this will be a big theme of this year.

Last year, I started doing "Bamboo", a kind of locally developed mixture of yoga-like stretching and climbing exercises. I'm still a fat, lazy, geek hunched over my computer, but I'm starting to become more conscious of my body and its movements.

Even I'd like to have my computer require more physical movement. I'd like to be able to program the way I scribble on the whiteboard in front of a class or in a meeting. I don't have cool giant touchscreens but at least I can get a cheap pen and start to play with the idea of gestures in my software.
Postado por Composing às 9:42 PM No comments:

watch out for some new stuff ...

and in even more places that you don't even know about yet :-)
Postado por Composing às 1:26 AM 2 comments: