It looks as though there's no real "illegality" in what Total are doing. Membership of the EU means that workers are free to work in any member country. And companies are free to pitch for business in other member countries. And it's quite understandable that a company would wish to use its own, known-quantity, employees and sub-contractors rather than find and hire new ones.

But the end result is that, as we crash into a major recession, the unemployed in some of impoverished parts of the UK see major work going ahead around them, and Italian and Portuguese guys brought in to do it.

They are understandably furious. Union spokespeople interviewed on the BBC yesterday were trying to walk an impossibly narrow tightrope. Not able to claim that IREM has broken any laws (or is even doing anything morally wrong) but wanting to echo the anger of their members. They're trying to do this by focusing on worries of a "race to the bottom" and the lack of social clauses in European freedom of labour rules. But, as far as I can tell, this isn't really the issue here. The Italians who are coming will be paid the same rate as UK contractors. They aren't being brought in because they're cheap. They're being brought in because the company that employs them is Italian and already familiar with them.

This is a horrible situation with no possibility of a happy outcome. The government and unions are caught in a dilemma. Go protectionist and they risk deepening the recession and wrecking European economic and political co-operation. Could the EU basically fall apart?

Defend the rights of foreign companies to work on contracts here, bringing their own labour, and they risk losing all credibility with the workers and opening the possibility of a right-wing working-class backlash. Think major gains for the British National Party in local government and within unions themselves; foreign workers everywhere in the UK becoming victims of xenophobia and racist attack.

There are only two options that might save us from this.

1) One is the government really commits to massive spending and development of its own in these areas, effectively creating enough jobs that this and similar cases don't matter all that much.

2) Or engage in quiet, behind the scenes, back-politicking with Total, IREM and maybe the Italian government ... for example to get them to create some extra positions for UK workers in this project. I'm talking even payoffs and bribes if it helps. It's underhand, ethically icky, but in this case, maybe it would be worth it. (Though I prefer option 1 obviously.)
Postado por Composing às 10:12 PM 2 comments:

Email ThisBlogThis!Share to TwitterShare to FacebookShare to Pinterest
Marcadores: art, dance, music, youtube
Simon Reynolds is revisiting some old essays on the "'Ardcore Continuum" (ah! maybe that's where the word "nuum" comes from!)

Email ThisBlogThis!Share to TwitterShare to FacebookShare to Pinterest
Marcadores: music, nuum
Apparently women in the UK are losing their jobs due to the recession far more rapidly than men.
Postado por Composing às 10:35 AM 1 comment:

Email ThisBlogThis!Share to TwitterShare to FacebookShare to Pinterest
Marcadores: economy, feminism, politics
Something that impresses me : the new active blogrolls in Blogger.

I think there's something very profound here. There was a danger that the blogroll would atrophy into a mere historical curiosity as people moved to using dedicated RSS readers to follow their friends.

But suddenly the situation is reverse.d The blogroll becomes your RSS reader. And it's the dedicated reader which is starting to look somewhat dated. Not only that but by adding second degree flow to the web (ie. people who read me also see what's up-to-date with the people I read) everything feels like its moving even faster.
Postado por Composing às 1:55 AM No comments: 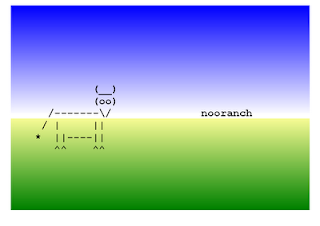 Nooranch.com gets the first taste of an (incremental) make-over.
Postado por Composing às 12:47 AM 2 comments:

Email ThisBlogThis!Share to TwitterShare to FacebookShare to Pinterest
Marcadores: nooranch

The Burning Piano
Postado por Composing às 12:01 AM No comments:

Email ThisBlogThis!Share to TwitterShare to FacebookShare to Pinterest
Marcadores: economy, netocracy, politics
I've been swapping some ideas with Darius in the last few weeks, thinking of an essay on "what is politics?"

We were considering the alleged fact that the senior managers of companies seemed to be gaining at the expense of the shareholders - awarding themselves ever larger bonuses and the like.

If this is true, rather than a media myth, is it a good counter-example to a Marxist theory that would predict that capital (ownership) tends to trump labour (even the most senior).

Darius thought that James Burnam's "Managerialism" might be relevant, but I (naturally) started wondering if Netocracy isn't the better frame of thinking.

Why would this phenomenon be yet another symptom of a shift to a netocratic society?

Because the managers who are (allegedly) rooking their shareholders are not succeeding in this due to either subterfuge or ability in their jobs. Instead they succeed because of a network of inter-supportive compensation committees.
Postado por Composing às 10:39 PM 3 comments:

Email ThisBlogThis!Share to TwitterShare to FacebookShare to Pinterest
Marcadores: netocracy
Round up of Pen interface research.
Postado por Composing às 10:55 AM No comments:

But then I also wonder about the health of Google App Engine. I recently paged thru their example application catalog and it’s a lot thinner than I would have expected. There was almost nothing in there that I thought: “Yeah! I should blog this.” That is not good.

Actually, those of a conspiratorial bent may find this research suspiciously convenient for Western propagandists.
Postado por Composing às 6:33 PM No comments:

One thing that infuriates my wife is that whenever she gives an opinion about something, I almost always start to disagree. Not so much because I disagree, but because seeing three sides of an argument is *interesting* to me. And hearing one side immediately triggers my attempt to find counters.

After reading another gruelling account of the current Israeli attack on Gaza and discussing the current situation I found myself saying that "but of course it wasn't as simple as the Jews stealing the land from the Palestinians. This area already had a large Jewish population under the Ottoman empire." which was a "factoid" that I'd picked up somewhere.

Today someone sent me an invite to one of those "lets get millions of people together on Facebook to condemn Israel" kind of things, which I felt reluctant to join. Was it "nuanced" enough? (I never like condemning anything - my preferred mode is understanding.) Might it not really be a front for perennial Arab nationalist? Etc. But I started to realize that this was mere prevarication ... excuse not to get involved. So I may end up joining and forwarding to all my Facebook friends (you've been warned).

Anyway, following a link from a discussion there I found Palestine Remembered and a debunking of the "already a large Jewish population" argument. Can't be sure how reliable it is, but I find this pretty compelling; and this linked story giving further support.

So I guess I was wrong. It seems that the Jewish population was a minority, and the theory that most Palestinians are just children of "gastarbeiters" is misleading propaganda. More fool me for immersing myself in too many warblogs and neocon apologists in recent years.

And when one thinks about that starkly, the whole edifice of Israel does start to look pretty dodgy. Was the whole thing really built by mass ethnic cleansing of the indigenous Arab population?
Postado por Composing às 12:11 AM No comments:

Email ThisBlogThis!Share to TwitterShare to FacebookShare to Pinterest
Marcadores: israel and palestine, politics

Email ThisBlogThis!Share to TwitterShare to FacebookShare to Pinterest
Marcadores: intellectual property
Behance has an interesting competition for artists to contribute ideas for the future of mobile music.

So far, though, I find the entries incredibly depressing. It's not exactly that they're bad or that some of the ideas don't seem "cool".

It's that the idea of music that they convey is 100% the one of "music as personal cocoon from the world". The personal devices are all about escaping from the social space into a world of ... well, if it was a world of "art" maybe that would be OK.

But there's no apparent love of music in the proposals. Industrial suppliers of musical escapism talk about "the music you love" ... thereby sidestepping the issue of what aesthetic vision *they* are trying to sell. Rock, soul, hip-hop, dubstep. They don't care. Music is the means, not the end. Their product is isolation.

In contrast, despite my pro-pirate tendencies, I just cracked open my PayPal piggybank and bought a real CD : Moon Wiring Club's Shoes Off And Chairs Away directly from the Blank Workshop site. Because of a Paypal mishap I had to mail him / them / the strange inhabitants of Clinkskell and ask for the CD to be sent to my UK address and not Brazil.

It arrived promptly yesterday, and I am ecstatically happy. Not so much with the music itself - the last Moon Wiring album grew on me rather than grabbed me immediately; for this new one, the atmosphere and weird juxtapositions are there, but the melodies haven't hooked into my brain yet I'm sure they will.) - but with the act of buying and getting a real CD from an artist who is so self evidently in love with the world he has created.. This is what makes it great music for me.

Update : semi-related. Over on the comments in SmartDisorganized, Albert gave me a nice compliment :

As I said before, what I liked the most about SDIdesk is that you actually use it yourself as opposed to being just the creator of an application. I personally am looking forward to starting with features that you would like to use yourself. Why? So then they will be implemented in a way that you would find convenient to use.

Of course, "build for yourself", like "scratch your itch" is a great heuristic for a programmer. Some of the best software is built like this.

Also some of the worst, of course. :-)
Postado por Composing às 8:29 PM No comments: 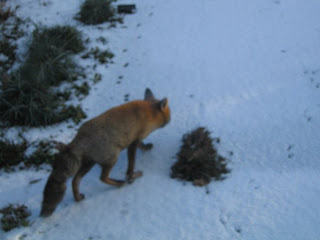 A fox I caught foraging in my mother's garden one snowy afternoon last week.
Postado por Composing às 9:47 AM 1 comment:

I don't have the energy to say much about this personally. Anyone wants me on record : I'm against the offensive on both pro-Palestinian grounds - the Palestinians are being unjustifiably collectively punished if not worse (ie. genocided) -; and pro-Israeli ones - it won't work, it will bleed away what precious moral strength Israel has left and may leave the country untenable in the longer run.
Postado por Composing às 8:52 PM No comments:

Email ThisBlogThis!Share to TwitterShare to FacebookShare to Pinterest
Marcadores: me composing, music
Simon Wardley. I just like the guy's style. :-)
Postado por Composing às 12:10 AM No comments:

Instead of compassion, reason, rationality and inspiration tempered with humility -- traits evident in the crisis-handling of other presidents -- we can easily recall self-indulgence, dangerous pride and indignity; sloganeering and exploitation in lieu of positive words and deeds -- words and deeds which so many of President Bush's predecessors have managed to summon under similar duress.

So in the face of a well-funded and high profile revisionist crusade, one of the most important tasks of our generation will be to preserve the real legacy -- the legitimate history -- of the Bush administration, and especially the sheer mediocrity of President Bush's immediate response, and utterly destructive long term reaction to September 11.

Why OpenOffice is great :