The only way to understand what's currently going on at the G20 is by reading Naomi Klein on Disaster Capitalism.

Having created a crisis, and convinced the world's governments to incur huge debts, bailing them out, the capitalist class have now used the problem of government indebtedness to further the agenda of shrinking the state.

Breathtaking ... if it wasn't so depressing.

Big question : is it possible to write apps. for it?
Postado por Composing às 11:01 PM No comments:

Today I shifted OPTIMAES from Ning to my WordPress hosting site.

It wasn't quite as happy a move as the Gbloink! migration. I haven't found a template that I like yet and I had some issues pulling in the old blog posts. I even managed to screw up the Gbloink! site at some point today. (It's OK now.)

Nevertheless, I'm glad to move over and have things more under my control. Not planning on doing anything more there in the immediate future, but at least its more respectable than the swamp of spam that the Ning site had become.
Postado por Composing às 5:01 PM No comments:

Email ThisBlogThis!Share to TwitterShare to FacebookShare to Pinterest
Marcadores: optimaes
Getting

The "next" parameter was bad or missing.

when trying to import a Blogger blog into WordPress? Read this link.
Postado por Composing às 7:16 AM No comments:

Starting to listen to it now, and seems like it's gonna be pretty fun. Of course if Oneohtrix is checking Harold Faltermeyer(!!!) then clearly my concern that Dam Funk could lead me into Paul Hardcastle b-sides, is not so far off the mark.

That's the sound of the summer? Paleo-synth-funk?

Update : Noooo! I can NOT and will not accept Rush. Hypnagogic Pop is not for me if they're going to start doing this. I'll live with Cleaners from Venus because it's lyrically clever and emotional. But really, OPN should have just skipped the whole "random song" thing and gone straight to Autechre. As it is, a great mix, totally ruined by that *!**£"$"%.

I mean, WTF is it? It's impossible to like seriously. And impossible to like ironically. It's just a kind of lump of primal uninterestingness. A kind of vacuum of taste or curiosity or ambition. The sound of people for who music isn't an end but merely a means to something else, something utterly dull.
Postado por Composing às 9:54 AM No comments:

This evening I took a look at the official Gbloink! page, and realized it was, er, pants.

Now I've got a video on YouTube and a couple of sets of gbloink!tunes up on SoundCloud, there was a danger that Gbloink! could look and sound quite respectable.

But the site itself was an embarrassment. (Count that as a BIG failure for GeekWeaver and for my sad lack of CSS skills. OK, my general resistance to web-design and CSS naivity is a large part of it; but if I'd had a working copy of GW, then I'd have been more tempted to tinker and try to improve matters.)

So I figured : I'm paying for hosting on Webfaction. I can have as many Wordpress blogs as I like. Why not put one to some use? I quickly discovered that Wordpress is formidably good these days. Very simple to set up on Webfaction. With a huge ecology of plugins that install themselves (I didn't know that!) And great templates.

It didn't take long to find a template I liked, pull the video from YouTube, install a SoundCloud plugin, and generally make a whole new-look for the old Gbloink! material.

So, I present: the new http://www.gbloink.com.

The controversial thing I've added is the Facebook "Like" button. I'm pretty conflicted about this. On the one hand, the purist in me doesn't like to give a company as evil as Facebook more power over the web, and my online existence. On the other, there is so clearly a wave of new infrastructure being constructed by Facebook and the other internet playas, and it's at least necessary to understand what's going on. And, anyway, playing with Wordpress plugins to engage the new web trends gives me an exhilarating sense of ... keeping up. :-P

A couple of questions you may be asking :

1) OK. But Gbloink! was written 13 years ago? What's with that? When are you going to get on and either a) write a new version or b) do something else of musical interest?

To which the answers are :

1) God knows! Last night I checked out London's mind-blowing OpenLabs' OpenNight which left me wildly inspired and a little bit overawed. These are hardcore open-source, experimental music geeks who do livecoding in Scheme, hack their own electronic instruments and even sing their explanations about using Bézier curves to model sound-waves. The previous time I went, one guy was DJing with mind-control!

Like I say, a bit overwhelming. I definitely want to get in with this, and maybe do a performance at some point; but not sure if I have anything awesome enough yet.

2) Well, my immediate thought is OPTIMAES. The Ning site got flooded with spam. And now Ning plan to charge. Meanwhile it looks as if Wordpress have social network plugins. It's possible I can have most of what Ning gave me, in a space I have more control over, and am *already* paying for. So, it's likely that I'll experiment with migrating OPTIMAES there.

Compare and contrast : Readability with Hacker Newspaper in light of this Rebooting the News.
Postado por Composing às 7:35 AM No comments:

Bad news from current climate negotiations. Nation states basically can't square their self-interest with any kind of global political deal at all.

So what next?
Postado por Composing às 6:13 AM No comments:

My first experiments with painting plastic bottles, a couple of years ago in Brasilia. 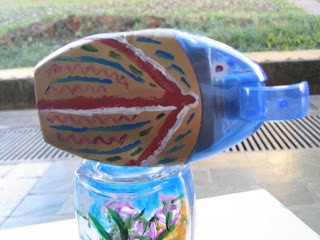 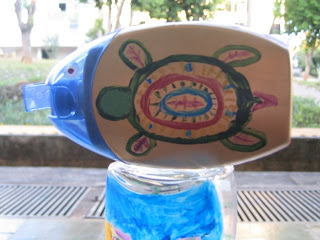 Email ThisBlogThis!Share to TwitterShare to FacebookShare to Pinterest
Marcadores: art, me composing, toys

Email ThisBlogThis!Share to TwitterShare to FacebookShare to Pinterest
Marcadores: empire, hexayurt, politics, the future, us

BTW: it's scary if the post-election Labour soul-searching takes a racist / anti-immigration turn.
Postado por Composing às 9:27 AM No comments:

I learned this rule from “Reading the Forested Landscape,” if you stand in the forest and all the trees are about the same size it tells you when the catastrophe happened. That works just as well for housing developments. If you take the rule seriously then one of your first questions is always: what were the catastrophes?