Dave Winer is looking for Tech. Product feeds. Is he going up as the feed-router rival of Engadget etc?

FWIW I think it would be mind-boggling if someone could persuade MadeInChina to have feeds. John Hegel and John Seely Brown's Global Process Networks on speed.
Postado por Composing às 11:13 PM No comments:

Email ThisBlogThis!Share to TwitterShare to FacebookShare to Pinterest
Marcadores: business, china, process networks, rss
w00t! Now figured out how to make my blog feeds include the first line of posts when there's no title ... no more "untitled"s on my FriendFeed.
Postado por Composing às 7:29 PM No comments:

Email ThisBlogThis!Share to TwitterShare to FacebookShare to Pinterest
This is a test ....
Postado por Composing às 7:06 PM No comments:

If you like comics, go over and vote for the Cursed Planet team before the end of June. They get a 12 month deal or something if they win.

Important point. It's not "biofuels" in themselves that are a problem. It's the idea that we can somehow keep our energy consumption at current rates and just shift from using exhausted oil to biofuels. Oil and coal were always more concentrated and energy rich than biomass alternatives. Biofuels are better at smaller local scales because they consume as much carbon while growing as they emit while burning, and they are available everywhere (you don't need a mass creation and distribution system).

But if you just try to reproduce the current petrol system of mass centralized production, worldwide distribution networks and mass consumption, then of course you'll have 90% of the problems of the existing system.

Now, there's a large body of literature saying "We built this software, a group came and used it, and they began to exhibit behaviors that surprised us enormously, so we've gone and documented these behaviors." Over and over and over again this pattern comes up.

The obvious response to someone keenly highlighting the flaws in such self-regulation is "what else is there?". Who's to say EBay won't turn around and abuse this new power of secret feedback to start taking bribes for favoured suppliers?

If you say that what stops them is that they'll go out of business, defeated by a more honest rival, you're simply shifting faith in one bottom-up system (EBay's reputation) for another (the market).

If you say that it's government oversight, how and where is that being expressed?

The problem with labelling human self-regulation "weak" and calling for leviathan to come and sort it out is that leviathan is just another flawed human being, and giving him more power, simply creates a greater temptation to abuse.
Postado por Composing às 11:20 PM No comments:

Consider this. When the last bubble was in internet technology, welfare was minimally affected – jobs were lost. When it shifted to housing and credit, welfare was affected more – houses and saving were lost.

Today, it’s shifting in large part to energy and food. What happens when hypercapitalism causes a food bubble? What happens when the masters of the universe in Greenwich bid up the price of food for India, China, and Africa's huddled masses? 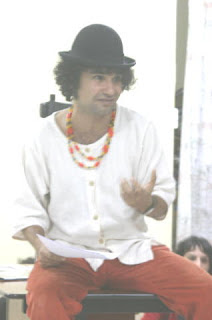 Clever idea from Current 93's David Tibet : subscription edition of forthcoming album - pricey but subscribers get lots of goodies. More importantly they need to send in their photos and will have them printed in the CD booklet. Good way for fans to get themselves acknowledged and make a statement.
Postado por Composing às 10:01 PM No comments:

Barter in OPTIMAES
Postado por Composing às 3:52 AM No comments:

Email ThisBlogThis!Share to TwitterShare to FacebookShare to Pinterest
Marcadores: circuit bending, electronics, music
I just couldn't resist posting this tonight. A bit of revisiting the past and frantic burst of coding and ...

If you don't know what that's all about ... start following the OPTIMAES blog, or better, join the network on Ning where we'll be talking about it and I'll dig some some of my old writings out.

Code is getting refactored, and results are gonna be published on Google Docs.