I understand and accept fully that the human race is harming the natural world by driving species to extinction, releasing long-lived pollutants, changing the climate and poisoning nature.

I understand and accept fully that the human race makes many suffer horribly and die in war, famine, injustice, poverty and oppression, and that we are failing to provide a good life for all of humanity.

I understand and fully accept that my own efforts appear unequal to the task of changing these facts.

I swear by the bones of the earth, the roots of the mountains to always treat those who understand and accept fully these Three Truths with dignity and respect, myself included.

Make a badge or banner, by any means, of this design. 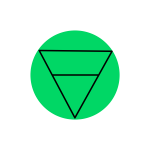 You are now a templar of Earth. Display the symbol as you will.

if the real physical economy is collapsing, unemployment keeps going up, more and more people are excluded from the economy all the time, then that gives you the ability to print money because the two things balance out. So you have this deflationary trend, of the economy collapsing, of property values and various asset prices falling, and at the same time you can re-inflate the economy by printing money. And that money ends up in the pockets of very few people who then use it to buy up physical goods. So that’s really the trend, we see this concentration of paper capital.

Email today from my electricity supplier :

You may have heard that we're changing our prices. With reduced quantities of North Sea gas we now buy more energy on the global wholesale market. World events are pushing up these prices and distribution and network charges are also increasing. This is affecting all energy suppliers in the UK. Unfortunately, as a result, we have to increase our prices.

We're sorry to say this increase will affect you and your new prices will come into effect on 1st October 2011. You'll shortly receive a letter with details about the changes to your tariff so you don't need to contact us...


It’s the hidden factor in the Somalia famine: not just drought and civil war, but the quiet hand of the marketplace in triggering a painful rise in food prices for millions of vulnerable people.

The prices of local food staples in Somalia have soared by up to 240 per cent in the past nine months, exceeding their record highs of 2008 and contributing to a worsening of the humanitarian disaster in the country, the World Bank says in a new report.

Note, I'm still trying to get my thoughts together to write more on the #londonriots. I seeded this wiki with links to stories that I find interesting. This is just one of many sporadic thoughts.

I just posted an answer to a thread about the London Riots in a discussion group, pointing out that Tottenham has far more unemployed people than job vacancies.

Without wanting to detract from the seriousness of that problem, I just realised something about Tottenham and my own borough of Hackney - they are basically inner suburbs developed at the end of the 19th century and beginning of 20th, mainly for lower middle-class households who worked in the centre of London or in the industrial belt further out.

Over the last 100 years, these boroughs have been infilled with denser and denser housing due to bombing; slum clearance and social housing and, more recently, gentrification. Now old three-storey houses are converted into multiple apartments; social housing is in the form of blocks typically 6-8 storeys high and there are a few taller blocks of 10-20 storeys.

In other words, the number of people has increased by a fair amount. But there is very little new commercial building. The number of traditional shops probably hasn't increased that much. The land is too expensive to build a shopping centre (they're built further out, mainly on ex-industrial land). You wouldn't be allowed to build a factory here. And it's too far out of the commercial centres of London for anyone to want to build offices.

So here's the question. In addition to all the other economic and political problems, does the urban structure of an inner-suburb like Tottenham or Hackney doom it to an imbalance of jobs and people seeking work? How much does the mismatch of residential locations and work locations within a zoned city act as a drag on creating jobs for people?
Postado por Composing às 3:51 PM No comments:

So, for those of you who don't know, riots and looting are breaking out around London tonight.

A couple of thoughts :

It's now blatant that this is NOT appearing on the BBC front page. Clearly the media have been told not to report it in case it encourages more people to join in.

There may be some sense in which Twitter IS helping spread the meme. People keep posting new hashtags of places where riots may be happening. Other twitterers then dismiss these, but in at least one case, Dalston, people were initially saying there was no riot, but later the shopping centre was attacked.

The Guardian thinks it's being organised.

At the same time, my bet is that it's a "bazaar of violence", as in a number of independent actors only loosely co-ordinated :

- There are presumably some people who want to protest at the police shooting on Thursday, especially as there are doubts over the assumption that it was a criminal who started it by firing at the police.

- Undoubtedly there are people involved in the looting after last night's riots in Tottenham and who realised that they really could just grab a lot of stuff.

- There are kids who probably are pissed off with the government for cutting their EMA.

- Perhaps there are political anarchists.

The question is, has the mob tasted blood? Have dozens, perhaps hundred, of teenagers, brought up in a materialist culture, wanting more than they can afford, just realised that if they go out at night en mass they can just take it?

No doubt this is not an organised political protest with any kind of coherent demand. It's an unfocussed anger, often mixed with selfishness. Does that make it any less of a political phenomena or response to the catastrophic political times we're in?

In one sense, I'll say yes. It certainly is less political. Politics does need goal-directedness, not just raw anger. At the same time, it would be remarkable if this wasn't in some way responding to the continual promises of austerity, depression and future poverty coming from the government and media. For all that the rioters lack the term "indignati".

Of course, it's kind of depressing seeing the reactionary comments on twitter and other social media. People calling for the army to be sent in to deal with the "scum" etc.

Still, it's understandable people are scared. And undoubtedly many innocents have lost jobs, homes or livelihoods in these riots. I'm sorry for them.
Postado por Composing às 10:25 PM No comments:

Now this is pretty weird :

[The] balinghou and jiulinghou cohorts typically have unusually strong bonds with their parents, which manifest themselves in unusual -- one might even say fruitful -- ways. On a typically busy workday, Liu Yuan, 29, an administrative assistant at Lenovo who's an avid player of Happy Garden, the FarmVille of Kaixin001, asks her mother to tend her crops. "She'll grow and harvest vegetables for me," says Liu, who thinks nothing of sharing her login and password with her mom. "When I'm at work, she'll send me a text asking what kind of vegetables." She says that many of her friends ask their mothers to do the same. (What makes this simultaneously perverse and loving in an only-in-China way is that, as youths, many of those moms were working on real farms as forced laborers during the Cultural Revolution.)